The pictures of people hooked up to oxygen bottles on the streets of New Delhi and patients sharing beds in overcrowded hospitals remind him of his uncle in India, who recently contracted the disease.

The ride at Shri Swaminarayan Mandir in London’s Neasden neighborhood is one of many fundraising drives taking place across the U.K. as members of the Indian diaspora seek to help India battle the raging pandemic. The British Asian Trust, a charity founded by Prince Charles, has launched an emergency appeal to buy oxygen concentrators, which can extract oxygen from the air when hospital supplies run short. 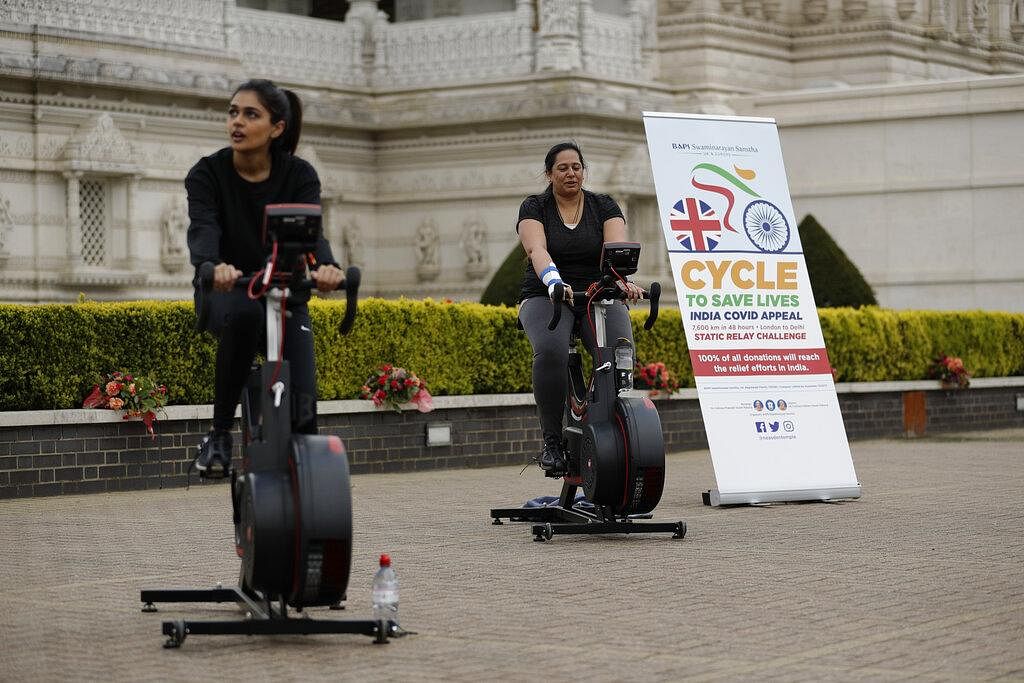 In normal times, British Indian families might respond to a crisis in the homeland by buying a plane ticket and going back to help their relatives. But these aren’t normal times for the 1.4 million people in the U.K. who have Indian roots.

Looking for a way to help, members of the Hindu temple in Neasden decided to organize a fundraiser that would be socially distanced and attract young people. They decided on the bikeathon because they also wanted to bring London and New Delhi closer together — connecting the two capitals in spirit even though most travel is barred by COVID-19 restrictions.

The need is dire, but so is the message of solidarity, said Tarun Patel, one of the organizers.

Organizers arranged a bank of 12 bikes in front of the temple, its domes and turrets just peaking out from scaffolding. Joining with temples in Leicester and Chigwell, they attracted 750 riders.

The efforts won’t solve India’s pandemic catastrophe, but the bikers of Britain want everyone in India to know that they did their best to ride to the rescue.

“You are not alone in this fight,’’ Patel said. “We are with you. We may geographically be thousands of miles away, but we are with you.’’