Parliament proceedings | We are with you when it comes to fighting China and Pak, but why fight the farmers, asks Gulam Nabi Azad

Parliament proceedings | We are with you when it comes to fighting China and Pak, but why fight the farmers, asks Gulam Nabi Azad


A day after both Houses of the Parliament were adjourned over Opposition’s protests against the new farm laws, Rajya Sabha members have come to a consensus on when to discuss the farmers’ protests and surrounding issues in the House.

Meanwhile, Lok Sabha is set to discuss Motion of Thanks on the President’s Address on Wednesday.

Here are the latest updates:

Law and order was 100 times better when J&K was a State, says Azad

Leader of Opposition Gulam Nabi Azad speaks about the situation in Kashmir following the abrogation of Article 370.

“I never heard Atal Bihari Vajpayee or any BJP leader who ever demanded that Jammu and Kashmir should be split into two. There was a demand for UT in only one district of Ladakh (Leh), not Kargil,” he says.

“Developmental works were 100 times better when there was a State government, even when it was BJP-PDP government,” he adds.

Tourism and education have been finished, says Mr. Azad.

“Tourists don’t visit the place much now, and the ones that do frequent just the luxury hotels, and rarely interact with locals. How can any local benefit from it?” he asks.

“As for education, the internet connection is often cut off, and even when available, it is 2G. In the age of 4G connectivity, how can we do anything with 2G? This is affecting the education of students, especially during this pandemic,” says Mr. Azad.

We are with you when it comes to fighting China and Pak, but why fight the farmers, asks Gulam Nabi Azad

Meanwhile, Opposition leader Gulam Nabi Azad recollects how the Congress government had interacted with farmers’ demands when they were in power.

“Farmers are ours, not of the Congress, but of you and all of us,” Mr. Azad tell the Prime Minister.

“We are with you when it comes to fighting against China and Pakistan. But why fight the farmers,” he asks.

He requests the government to take back to the three farm Acts, to form a committee to look for the people who went missing on January 26.

“We condemn whatever happened at Red Fort on January 26. Those involved should be given strict punishment. But those who are innocent, should not be implicated with false cases,” says Mr. Azad.

“How can a person who has been MoS External Affairs and represented India all over the world be a traitor of the state,” he asks, referring to the sedition case filed against Shashi Tharoor.

Q/A submitted to the Rajya Sabha

Ministry of Home Affairs has informed Rajya Sabha that the Delhi Police has said that Ghazipur, Chilla,Tikri and Singhu borders are blocked by agitating farmers, and is causing inconvenience to the residents of Delhi and neighbouring States. In any agitation, the financial loss is incurred by people and governments, says MHA.

As per reports, illegal Rohingya immigrants are presently staying in India mostly in the States of Jammu & Kashmir, Telangana, Punjab, Haryana, Uttar Pradesh, Delhi, Rajasthan, Tamil Nadu, West Bengal, Assam, Karnataka and Kerala. Since illegal immigrants enter into the country without valid travel documents in clandestine and surreptitious manner, there is no accurate data regarding number of such migrants living in the country, says MHA.

On house arrests in Kashmir

Since August 1, 2019, 613 persons including separatists, over ground workers, stone pelters etc. were detained at various points of time. Out of these, based on regular review and ground situation, 430 persons have been released till date.

We can’t reach any decision by fighting with farmers, says Gulam Nabi Azad

Leader of Opposition Ghulam Nabi Azad starts discussion on Motion of Thanks on President’s Address.

He says he will focus on two aspects of the address — farmers and Jammu & Kashmir. He says he is happy that the Prime Minister is in the House when he is discussing these topics.

“Jai Jawan, Jai Kisan has been the slogan of our party, as said by late Prime Minister Lal Bahadur Shastri. The slogan is as necessary today as it was then,” says Mr. Azad.

“The farmers’ struggle has been going on for years. At one point, it was against feudalism” he says, adding, “we can’t reach any decision by fighting with farmers.”

Motion of Thanks on President’s address moved and seconded.

There are 118 amendments to the motion, says Chairman, and moves them one by one. 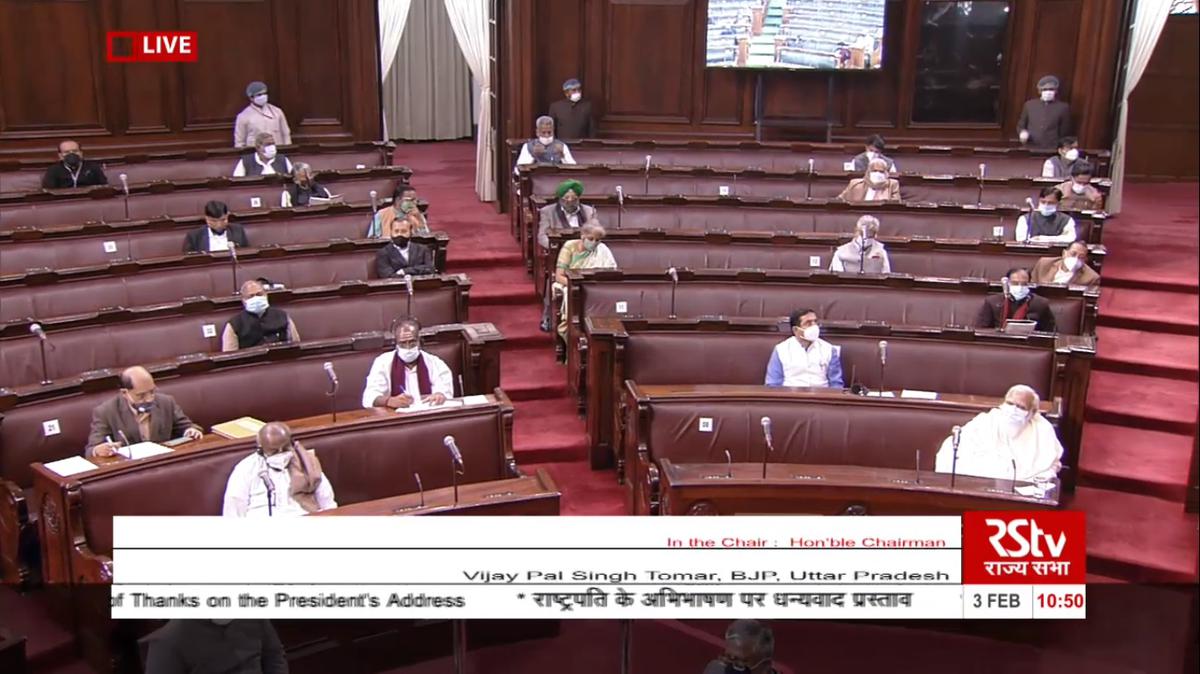 “It has been said there was no consultation before the farm laws were enacted. There have been 12 expert committees in the past 2 decades on the farm reform laws,” says Mr. Tomar.

He hits back against criticism that under these laws, MSP will be stopped or land will be seized, or mandis will be stopped. He says that new laws will help small farmers and agricultural sector.

NDA government has given more Budget for agriculture in one year than five years of UPA government, says Tomar.

Vijay Pal Singh Tomar seconds the Motion of Thanks on the President’s address.

He goes on to describe the govenment’s achievements in international scale, citing the sale of vaccines to neighbouring countries as an example of India’s ‘Vasudeva kudumbakam’ policy.

Bhubaneswar Kalita says that some members of Opposition are trying raise the farm laws issue to disrupt the House proceedings.

In a long-winded speech, MP Kalita said that all parties that are against the Citizenship Amendment Act will lose in Assam elections in 2021, and BJP alliance will return to power.

“PM Modi and Central government officials have visited Assam and northeastern States 40 times during his two terms. This is probably the first time any Prime Minister has paid so much attention to the northeast,” says Mr. Kalita.

Bhubaneswar Kalita moves Motion of Thanks on President’s Address.

“It is a speech full of achievements under leadership of Prime Minister Narendra Modi,” he says. 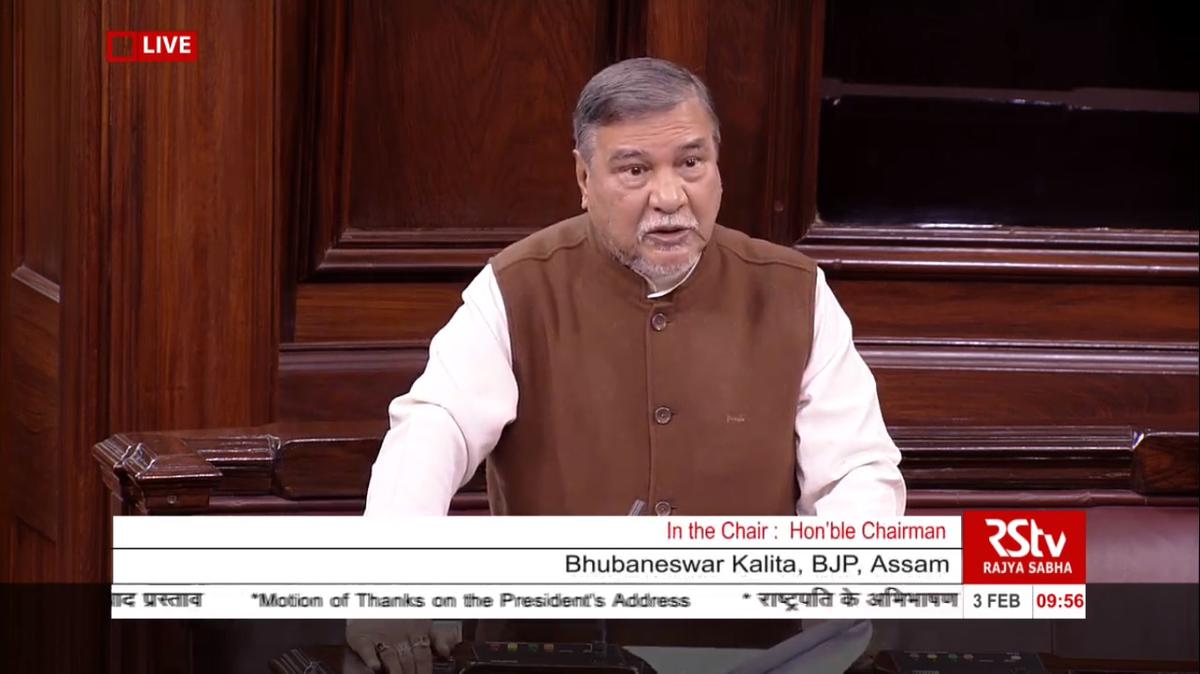 “The government is dedicated to strengthening the underprivileged sections of society. Our Prime Minister Narendra Modi believes in 100% and not less than that, like previous governments. Regardless of whether it is toilets or electricity, it has to be 100%,” says Mr. Kalita.

This government believes in 100% implementation of its promises, says Mr. Kalita.

He claims that the economy has started recovering due to efforts taken by the government, and goes on to list ways in which the government’s policies have helped members of his consitituency.

3 MPs escorted out of RS

Chairman tells the three MPs to withdraw, but they continue to raise slogans, thus disrupting proceedings in the House.

“Don’t create a situation where I have to call the marshals and send you out,” Chairman Naidu tells the MPs.

He repeats that the MPs can discuss farmers’ issues in the discussion on Motion of Thanks on President’s Address.

He asks marshals to “help them out” of the House.

Congress MP Digvijaya Singh raises issue of FIRs filed against politicians and journalists. He cites example of Shashi Tharoor, Rajdeep Sardesai, Mandeep Punia and Mrinal Pande, against who cases have been filed, including on charges of sedition.

He asks Home Minister to withdraw these cases.

Disruptions start as Chairman calls for discussion on Motion of Thanks for President’s address. Chairman tells those disrupting that they are not doing anything good for farmers.

“They wanted a discussion and when it starts, they disrupt. Let the entire country see,” says Mr. Naidu.

Around 140 such incidents noted so far, he says. He appeals to the MHA to ask the State government for a report on the issue.

NCP MP Fauzia Khan says bureaucracts have huge workload and there is a need to increase the number of seats in civil services.

Congress MP Rajmani Patel says farmers are not getting the benefits of the PM Fasal Bima Yojana.

DMK MP Tiruchi Siva raises issue of missing fishermen in Tamil Nadu. “They have been brutally attacked and killed,” he says. “Fishermen in Tamil Nadu compelled to give up their profession due to harassment of Sri Lankan Navy. The Prime Minister should condemn this,” says Mr. Siva.

AIADMK MP M. Thambidurai  too throws his weight behind Mr. Siva. “235 fishermen from Tamil Nadu killed by Sri Lankan Navy till now,” he says, adding that the issue should be addressed urgently.

Replying to the two MPs from Tamil Nadu, Chairman Naidu says that this is an ongoing issue. “Successive governments have been doing their best. The problem should be resolved once and for all,” he says.

External Affairs Minister S. Jaishankar responds that the issues has been taken up with the Sri Lankan government, and that such incidents in general, and this incident in particular are unacceptable.

“This particular incident was particularly unacceptable and this has been made clear to them,” says Mr. Jaishankar.

Parliamentary Affairs Minister Pralhad Joshi said that he has spoken to the Leader of Opposition and there is a consensus to give more time for discussion on the Motion of Thanks to the President’s address.

He says Question Hour can be suspended today, and Question Hour and Zero Hour tomorrow to take up discussion on the farm laws and farmers’ protests.

“Normally this is not done,” says Mr. Naidu, referring to suspension of Question Hour and Zero Hour, adding, “but there is a specific request and broad consensus, hence I am allowing it.

Reports of Department-related Standing Committees on Industry, Environment and Forest, and Transport, Tourism and Culture laid on table.

Reports of Department-related Parliamentary Standing Committees on Finance and Labour laid on table.

Rajya Sabha Chairman M. Venkaiah Naidu warns members against recording Parliament proceedings on mobile phones. “Some members are using their mobile phones to record proceedings. Such unauthorised recording and sharing on social media can lead to breach of privilege,” he says.

Mr. Naidu warns members and the media not to use such recordings.

Motion of Thanks on the President’s Address

Motion of Thanks on the President’s Address

The Budget session of the Rajya Sabha has been rescheduled and will conclude two days before schedule. The decision in this regard was taken at a meeting of Rajya Sabha Chairman M. Venkaiah Naidu with the floor leaders of all the parties of the upper house.

The first part of the session will now conclude on February 13, with the House meeting on that Saturday, instead of February 15.

In the monsoon session of Parliament, too, the two houses had sat over the weekend. But in a loosening the COVID-19 protocol, this time, the weekend break for both the houses had been restored. The schedule, said sources, has been changed in accordance with the members’ request, as it gives the Standing Committees more time to peruse the Budget and come up with their reports before the start of the second part of the session.